Sometime last year my parents called me to say that they wouldn’t be able to meet up on the coming weekend as they had to go and look after my brother’s kids. Nothing unusual about this as more and more retirees find themselves called upon to perform grandparenting duties in times of need – in this case my brother had to travel for work and my sister-in-law was not feeling well. What made this somewhat more unusual was that my parents were in France at the time and my brother lives in Australia. So, they duly cut their stay in France short, bought return tickets to Australia, flew back to the UK packed their bags and went out to Australia for 3 weeks (my brother had had to go to China and South Korea).

Unusual but not unique. As families become increasingly transnational, more and more people are drawn into these long-distance family and caring relationships. But this is not limited to family relationships. Wherever we look, from travel and transport to economics and the media, we seem to see evidence of the increasingly globalized nature of social action.

Workers across the world are increasingly believed to be caught up in the global economic flows of trade and investment that encircle the world and bind countries together as part of a global market. Advances in transportation and communications have also appeared to shrink the world around us. Email and video calls make it possible to instantly speak to people thousands of miles away. Satellite television and internet streaming make it possible to watch foreign TV, news or sporting events from your home or even on the move. This movement of images and things is mirrored by the movement of people. Cheap flights have made it possible for many in the high-income countries to explore the world, whilst millions of people are forced to migrate to escape war and poverty throughout other parts of the world. All of which is reconfiguring our notions of social geography.

This series of transformations poses challenges for gerontology as well as for older people themselves. If we assume that notions of time and space are intimately interconnected then the changing nature of space raises many questions about how we see time, and ultimately, how we think about ageing. Yet it is widely acknowledged that there is still relatively little research on the interconnections between globalization and ageing. Redressing this gap is important, not simply because a more integrated approach to globalization is increasingly necessary, but also because the continuing effects of the global economic crisis of 2008 have destabilised many of the assumptions and policies formulated in the twentieth century for old age.

However, we must also be cautious of claims made about the ‘global’ nature of population ageing as well as arguments that globalisation has a uniformly negative impact on older people. Indeed, when we look at the evidence we can draw two conclusions. Firstly, there is no single ‘spatial logic’ of ageing and later life. Rather there are significant historical and future differences in the timing, speed and level of population ageing as well as in the spatial distribution of older populations and the ageing of the older population itself. As figure 1 shows, there is an intersection between economic geography and demography. 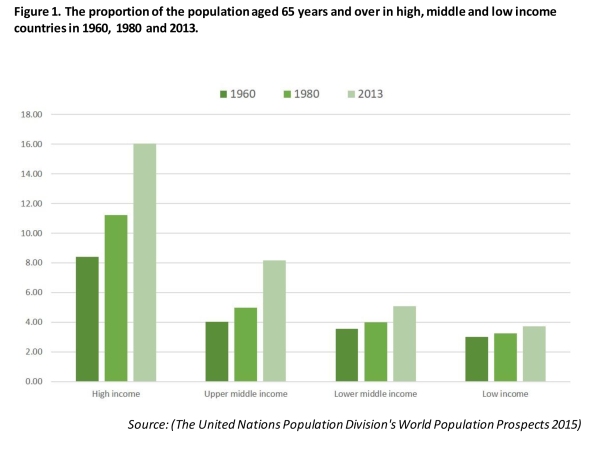 So, while it is true that life expectancy is increasing and fertility rates are declining in almost all countries, at present and in the near future, older people only make up a small proportion of the population in many developing countries. The fact that population ageing remains relatively confined to the advanced industrial nations is perhaps the most potent argument against the emergence of a global time-space for later life. Rather, the economic, political and cultural co-ordinates of later life are located in a series of overlapping, sometimes conflicting, and sometimes co-ordinated spatial logics and temporal frames. Our second conclusion is that the material aspects of globalization have a very weak effect on the conditions of later life. Our analyses of the data show that global actors have not created a ‘race to the bottom’ in the services and institutions that aim to ensure the well-being of older people. Rather there are still wide international variations in spending on healthcare, rates of labour market participation and pension provision. Moreover, as the data in figure 2 show, exposure to economic openness has little or no impact on these aspects.

Figure 2. The relationship between economic globalization and public spending on old age benefits in the OECD countries: 2011

The new masters of the universe

However, this is not to say that global actors have no impact. Several ‘epistemic communities’ have emerged, around anti-ageing medicine, the new pension orthodoxy and active ageing. Müller (2003) has defined epistemic communities as networks of knowledge-based experts, potentially drawn from a variety of fields, who share a common belief in ‘specific truths, a set of normative and causal beliefs, patterns of reasoning, and discursive practices’. In each case the networks we identified comprise global actors, such as the World Bank, the UN and multinational cosmetics corporations, as well as regional actors, like the EU or ASEAN, and national governments. The existence of these epistemic communities problematizes the dominance of methodological nationalism in the formulation of both the policies and the cultures of old age. They also challenge, once again, the too simplistic equation of globalization with the imagery of an unstoppable juggernaut which operates with its own deterministic logic. Instead we have to move away from the either/or of national or global actors being determinant for the production of the conditions for ageing and later life and rather that we need to examine the assemblages of actors operating at different spatial levels.

Overall our analyses show that although global processes are having an effect on the experiences of ageing and old age, so too are many other things. Of significant note is that it is often older people themselves who, through their own social and cultural engagements, are responsible for reconfiguring the field of ageing and it this continuing engagement that ensures that the relationship between later life and the development of these new spatialities will be one of transformation rather than determinism. This conclusion has been starkly underlined by recent global events. On the one hand we have witnessed the continued mass migration of people around the world. Alongside this we are seeing the reassertion of the sovereignty of the nation-state, a return of protectionist and isolationist rhetoric and the creation of both symbolic and actual borders. Yet the current trends towards deglobalization are not associated with a push to improve the lot of older people, demonstrating that a return to the ‘nation state’ is no guarantee of better protection for older people.